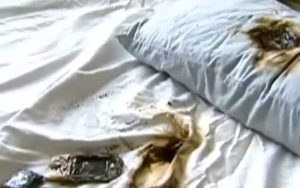 Young teen sleeps with her phone under her pillow and wakes to smoke as smoldering cell phone starts a fire! This is what happened to one teen. The picture shows the damage caused by the phone to the teen’s pillow. This was something that they sure did not expect to wake up to. Can you imagine this situation happening to you!

The whole phone melted,” her father, Thomas, added. “The plastic, the glass. You can’t even really tell that it was a phone”.  There is not much left of this phone. The family is thankful it is just a damaged pillow and not a lot more serious!

The family contacted the news, and then Samsung, who pointed out that the battery inside the phone was in fact a replacement and not an original Samsung unit. They also pointed out that the phone’s user guide advises against such an action, noting that covering a device with bedding or other material can restrict airflow and start a fire. Who reads the instructions or the warnings that come with the phone. We are generally so excited to use our new phones that we ignore all of these instructions.

The Tolfrees, though, did not read that warning. (And let’s be honest – when’s the last time you read through the complete instructions to any electronic device you purchased?) “If anything, they should put a big warning on it, like a cigarette label, if that’s the case,” Thomas said.

Samsung has requested the burnt phone be sent to them for a post-mortem, and they are providing the Tolfrees with a replacement device, as well as fresh bedding and a new mattress and pillow.

Looks like the Phone Fairy came after all. This is a story that could have been much worse. Both the family as well as Samsung are really lucky that they did not have to deal with something much worse than what happened.

In a related story, many people are also losing sleep because they take their cell phones to bed with them. They want to stay in touch. If someone sends them a message in the middle of the night they can react to the message. Personally the writer takes his phone to bed. It stays on the night table and is used as an alarm clock. The setting for privacy is set from 10pm to 7 pm. There are no beeps or alerts during that time regardless of what messages or alerts come in.

We should say that this is common to all cell phones not just Samsung Cell Phones. If your phone does not have a privacy setting, then you are really better off to leave it down stairs away from the bedroom so that you can get a good nights sleep. Too many people are getting up in the morning not rested and not performing well during the day as a result.

Teens can be especially affected because they need a lot of sleep as their bodies are adjusting to adulthood. Parents you may want to speak with your teens or remove the phone at night so that they can get the sleep they need to have. Even school results can be impacted due to lack of sleep.