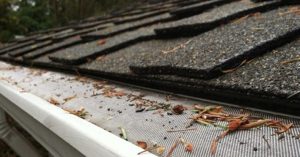 As a homeowner I’ve always wondered should you install gutter guards in my eaves trough? I have always cleaned out the eaves trough at least once a year and sometimes twice a year. They’re always seem to be an accumulation of leaves, keys from the maple tree in front of our house, and other debris that lands on your roof and is washed into the eaves trough. When I was younger, it was no problem to get up on the ladder and clean out the stuff. Now that I’m getting older and inclined to climb less I’m wondering if I should invest in a gutter guard for the eaves trough or pay someone to clean it out?

Should You Install Gutter Guards

It will probably cost between $50 and $100 each time I have someone come over and clean out our eaves trough. If I do it twice a year that will be $200 a year. Over 10 years that’s $2000 that I will spend paying someone to clean out my eaves trough not taking into account any inflation.

I have about 50 feet of eaves trough that would need a gutter guard installed. At $20 per foot, that’s about $1000 in total for the cost of the materials. I probably could install it myself at this point. But many people are unable or just do not want to get up on a ladder to install something like a gutter guard in the eaves trough. Installation of the eaves trough would probably take a couple of hours. Conservatively it would cost roughly $200 to install for a total cost of $1200 compared to paying $2000 over 10 years.

There will be some overflow onto your garden, driveway, or whatever’s underneath your roof. Some water will not drain through the gutter guard and will simply flow over the gutter guard. This will happen in severe and heavy rainstorms.

Since we just had our tree removed, I have decided not to install the gutter guard. I probably will get them cleaned once a year. Which will cut my costs in half and make it much cheaper than having gutter guards installed and risking that I will still have to have the debris removed from them. Each consumer should evaluate their own situation, understand the costs involved in your location. Make your own decision using these kinds of guidelines and thought process that I went through for myself.