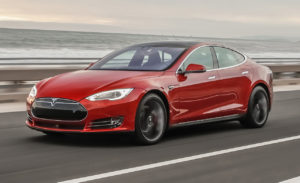 The Tesla roadster is a sleek electric vehicle running 245 miles on a single charge. It runs 0 to 60 in 2.7 seconds. This particular car is a 2013 model and was seen in Palm Springs. It takes 45 minutes to charge on a 240 volt connection. The trunk is small and this is a really sleek car! This is a superb looking car and it is a very modern vehicle that heralds the future of electric cars. Although it is very expensive at this stage, it is really a test case for the manufacturers to see what works and what does not from everything to how the car performs to the power distribution stations where you can recharge the batteries.

At the time of writing this post and information I learned from the owner, the biggest issue is planning your trip to make sure there was a location where he could recharge the batteries. He had to plan his trip around this in much the same way it was 100 years ago when cars were first beginning to appear on the roads. They needed to make sure they knew were the next gas station was going to be or where they could purchase a couple of gallons of gasoline to keep them going.

These electric vehicles are much the same regardless of how much you pay for them. You have to plan were you can recharge the batteries and who you can pay to plug your car into recharge. It will be another decade before we see distribution systems offering power to recharge batteries. This is why in the writer’s opinion, the hybrid is the way to go to make sure you can always take advantage of the gasoline engine to power your car when batteries are running low.

I cannot imagine driving a car that I paid so much money for and just driving it around the city. I would want to take it out onto the main highways. Really test it out in terms of performance. I would want to take it on longer trips and maybe even on a long vacation. Unfortunately at this stage in the evolution of 100% electric vehicles, recharging those batteries is a big issue.

Most if not all of them including the Tesla roadster can be plugged into a regular 100 volt socket that delivers a maximum of 15 amps. The problem with this is that it will take many hours to recharge the batteries. Who wants to wait around for even half an hour for the batteries to recharge let alone for many hours.

If you are visiting someone and you recharge the car overnight, this would be no problem. You might even pay your host for the electricity that you are using in much the same way you would pay the local gas station for gas. In the morning your batteries are recharged and you are ready to go. But what if you are on a long trip and cannot stop at a friend’s place. Where do you recharge your cars batteries? California is one of the few states that is setting up recharging stations along the interstate which will charge an electric cars batteries in less than an hour. Again you must know where they are and plan your trip around them.

The gentleman in Palm Springs that I met who owns the Tesla roadster was taking his car from Palm Springs to Vancouver where he lives. He was in the process of planning his trip. He had a couple of friends that he was going to visit along the way to recharge his car’s batteries. It will be interesting to see how he makes out and whether he got stranded somewhere with no battery power. I guess CAA or AAA will still tow your car to a recharging station. Who wants to have this happen especially when you are driving an expensive care like the Tesla Roadster.

We have taken a different slant on this post about electric cars. The government and the manufacturers are really experimenting at this stage. They know that the electric infrastructure needs to be built up to facilitate more people purchasing these cars. They know it will take time. This is really the beginning of that infrastructure build up with California taking the lead. Let’s see how many states follow in the next 10 years.