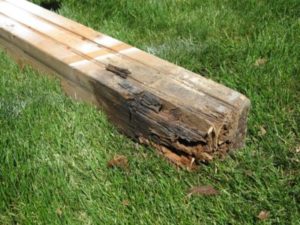 We recently read a post about treated lumber rotting. The writer was surprised that the treated lumber on their deck had begun to rot. They had been assured that the lumber would not rot and would last a lifetime.

The bottom line is that all wood will eventually rot. Some will rot faster than others. It really depends on the type of wood used, the treating process and the location where the wood is placed. Treated lumber rotting is a common problem. Anytime you have moisture from poor drainage it will rot. If there is poor air circulation with moisture, it will rot. If there are insects such as termites, they will attack.

I have pulled out fence posts encased in concrete that are as good as the day they were installed after 29 years. On some posts where the concrete was below ground, the posts had begun to rot at ground level. They were exposed to dirt, moisture, poor air circulation and insects.

Deck components lasted equally well except for those pieces that were exposed to constant moisture. We had to replace the deck after 27 years. Either way this is not a bad life cycle for treated lumber.

Bottom line, don’t expect treated lumber to last a life time and you will not be disappointed. Expected it to last 15 to 30 years under good conditions. Check the condition on a regular basis, especially as the deck, fence etc. gets older. You will avoid surprises this way.

Also, don’t you think it is time to update your deck design, fence etc after 20 to 30 years! For more fence posts, click here.